CLEF 2017 will be held at Trinity College Dublin, Ireland

Founded in 1592, Trinity College, Coláiste na Tríonóide, is the sole constituent college of the University of Dublin. Originally it was established outside the city walls of Dublin in the buildings of the dissolved Augustinian Priory of All Hallows. 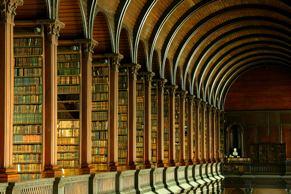 Located in a beautiful campus in the heart of Dublin’s city centre, Trinity College is now surrounded by Dublin. It is located on College Green, opposite the former Irish Houses of Parliament. The college proper occupies 190,000 m2 (47 acres), with many of its buildings ranged around large quadrangles (known as 'squares') and two playing fields.

Trinity is Ireland’s highest ranked university and one of the world’s top 100. It is home to 17,000 undergraduate and postgraduate students across all the major disciplines in the arts and humanities, and in business, law, engineering, science, and health sciences. The Library of Trinity College is a legal deposit library for Ireland and the United Kingdom, containing over 6.2 million printed volumes and significant quantities of manuscripts (including the Book of Kells), maps and music. 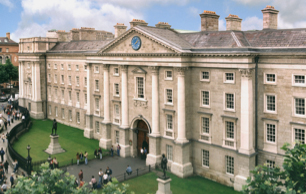 Trinity has produced some of the world’s finest, most original minds including the writers Oscar Wilde and Samuel Beckett (Nobel laureate), the scientists William Rowan Hamilton and Ernest Walton (Nobel laureate), the political thinker Edmund Burke, and the former President of Ireland and UNHCR Mary Robinson. Today Trinity encourages a campus culture of scholarship, innovation, creativity, entrepreneurship and dedication to societal reform.